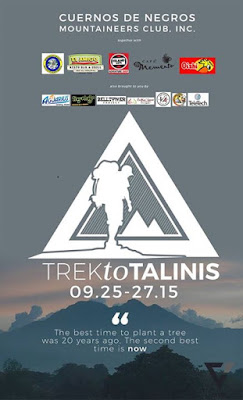 Trek to Talinis is an annual climb organized by the Cuernos De Negros Mountaineers Club, Inc. based in Dumaguete City. It is an open climb though slots were limited. This year the theme was "The best year to plant a tree was 20 years ago. The second best time is now". Aside from the climb itself, the event also have a tree planting activity. The climb was held last September 25-27, 2015. Yes, it took me six months before I had the urge to create an entry for this climb :)

Mt. Talinis, also known as Cuernos de Negros (horns of Negros), is categorized as a major climb by pinoymountaineer with difficulty set at 6/9. Standing at more than 1,900MASL, Talinis is almost twice the height of Cebu's tallest, the Osmeña Peak.

For major climbs, it is recommended to do aerobic exercise prior to the climb. I did mountain biking thrice a week for two weeks before the climb itself. I also had a simulation climb at Kan-Irag, to test my equipment as well as my fitness level.

The pre-climb orientation was held the night before the climb itself so I had to be at Dumaguete before then. I took the 12:30nn scheduled Ceres bus at the South Bus Terminal to Dumaguete. Travel time from Cebu to Dumaguete is around 5 hours. The orientation, tackled discussions all about Mt. Talinis, what to expect on the trek and LNT principle. It was also a chance to meet the participants of the event.

Before the trek, we had the tree planting activity at the jump-off site at Bediao. It was already raining hard when we reached the jump-off site and there were no signs of the rain stopping anytime soon. The rain also forced me to tuck my camera deep into my backpack for safety. Not so much photos for this trek then.

Since we had a large group, there were 25 of us including the local guides, the team was divided into three groups,lead, middle and sweep packs. Although I am not sure if I could keep up with the group, I decided to go with the lead pack.

The trail, wet from the constant rain, was mostly steep ascend through roots of the rainforest. Our pit stops were very limited to short time though since resting for a long time under the cold rain was unbearable. We had to keep moving to also keep our bodies warm.

We reached Lake Yagumyum at noon, just in time for lunch. The lake was expansive and could also serve as an emergency campsite. We were not able to explore the lake though due to the persisting rains. Instead, we just rested under our tarp. After an hour of rest, the trek resumed, still under rainy conditions.

The rain stopped from time to time but just for a few minutes. We chanced a clearing near the top of Lake Nailig and we had a view of the surrounding mountains.


We reached our campsite, Lake Nailig, before dusk. The rain also weakened which allowed us to pitch our shelters dry.


Day 2 was intended for assault to the peak. But the cold bed weather was too comfortable and I overslept. I guess I have to summit Mt. Talinis at another time. Most of the day was spent under the comfortable dryness of our tent. At night after dinner, all of the participants gathered for some socials. We shared stories of why we were climbing mountains as well as what Mt. Talinis have taught us. Some were jokers and kept the socials lively and had us all end up in laughter.


Day 3 and it was still drizzling. Breaking camp was a challenge. Towing away my tent and keeping it as dry as I could was a struggle. We were able to completely break camp at around 10:00am, two hours behind schedule.

We reached the Kaipuhan sulfur river at around 12:00 noon. The strong sulfur smell from the river reminded me of Mt. Apo's boulder trail. The sulfur vents clearly shows that Mt. Talinis is also a volcano.


Due to our delays, the side trip to the falls was cancelled. Instead, we had our lunch and rested at the small cottage with tarps of various mountaineering groups who visited Mt. Talinis. The subsequent trail was a short ascend to the Apolong ridge. After reaching the ridge top, the trail now eases to a long rolling descent. The lead pack reached the trail end at around 5:00pm while the sweeper pack arrived at around 8:00pm.

Back to El Amigo, we were greeted with a great event by the Cuernos de Negros Mountaineers Club, celebrating the successful trek. With good food and local bands serenading us, this was the best ender to a great climb event.

Other Blogs to Read